How can a Fog Cannon be used for Dust Suppression? 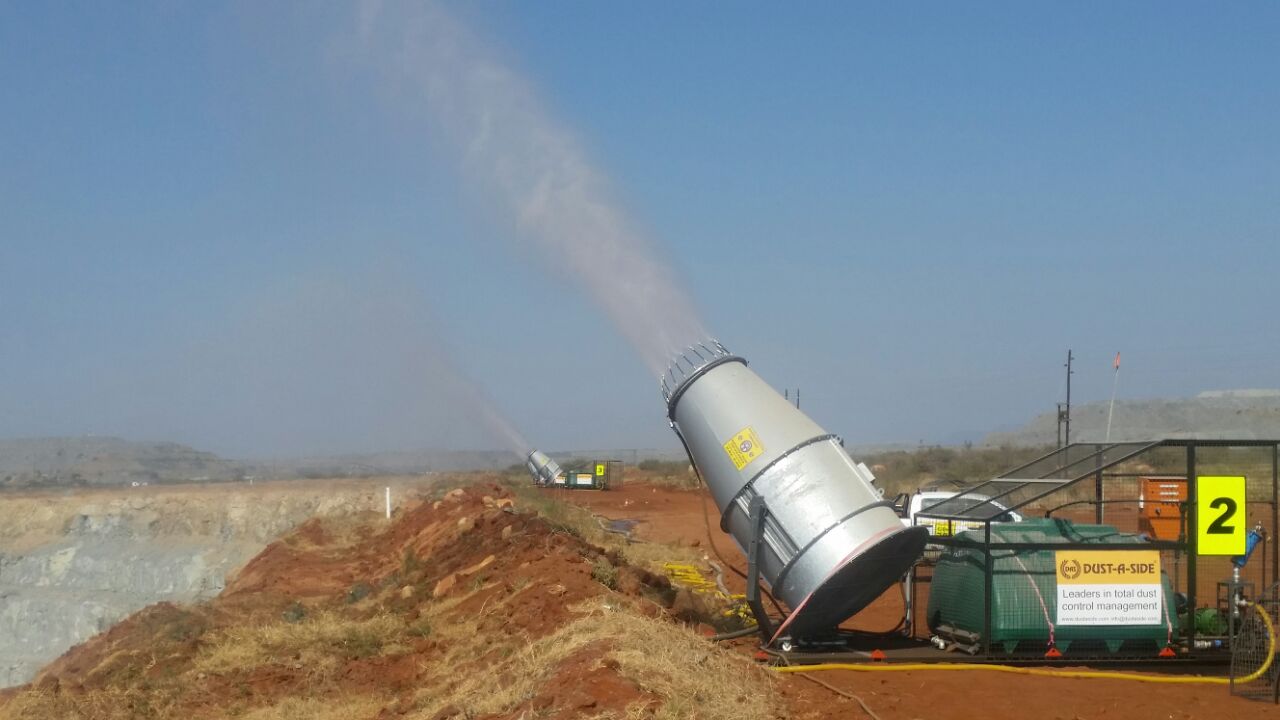 They are ideal for use in scenarios where visible dust, rather than respirable sized dust, is a major problem.

In this article, we’ll look at how fog cannons operate as well as the types of circumstances they are most effectively used in as a dust suppression solution.

What is a Fog Cannon and how does it work?

In simple terms, a fog cannon uses highly pressurised water which is pumped through a series of jet nozzles, turning the water into mist through atomisation. This fine mist is dispersed through the air by a powerful fan.

Each fog cannon has its own generator and is set up on skids, allowing it to be moved around as dictated by weather conditions and the type of dust being generated. Once it is hooked up to a source of water, it is good to go.

The cannons are strategically placed near sources of dust, such as open tip areas, haul roads or loading areas. When dust particles hit the mist, the particles are captured and the water dissipates before ever having the chance to spread.

Fog cannons can come in a variety of sizes with different throw ranges. The cannons can also either be fixed or oscillating.

For example, a cannon could have between 20 – 25 nozzles, reaching a water throw range of 80 metres, use 3 litres of water per minute per nozzle, and oscillate 140 degrees.

The cannons can be manually or remotely activated when high levels of dust are generated combined with certain weather conditions.

The amount of water being used by the cannons can also be fully controlled in order to optimise water consumption.

The key to the success of fog cannons is not just about how much water can be blasted from the cannon or how far the water can reach.

The spray nozzles need to be strategically selected so the correct sized water droplets are released into the air, dependant on the individual operating conditions.

As you can see from the following diagram, larger water droplets displace more air, allowing the fast-moving airborne dust particles to simply flow around them. Whereas if the droplets are too light, the water will vaporise. 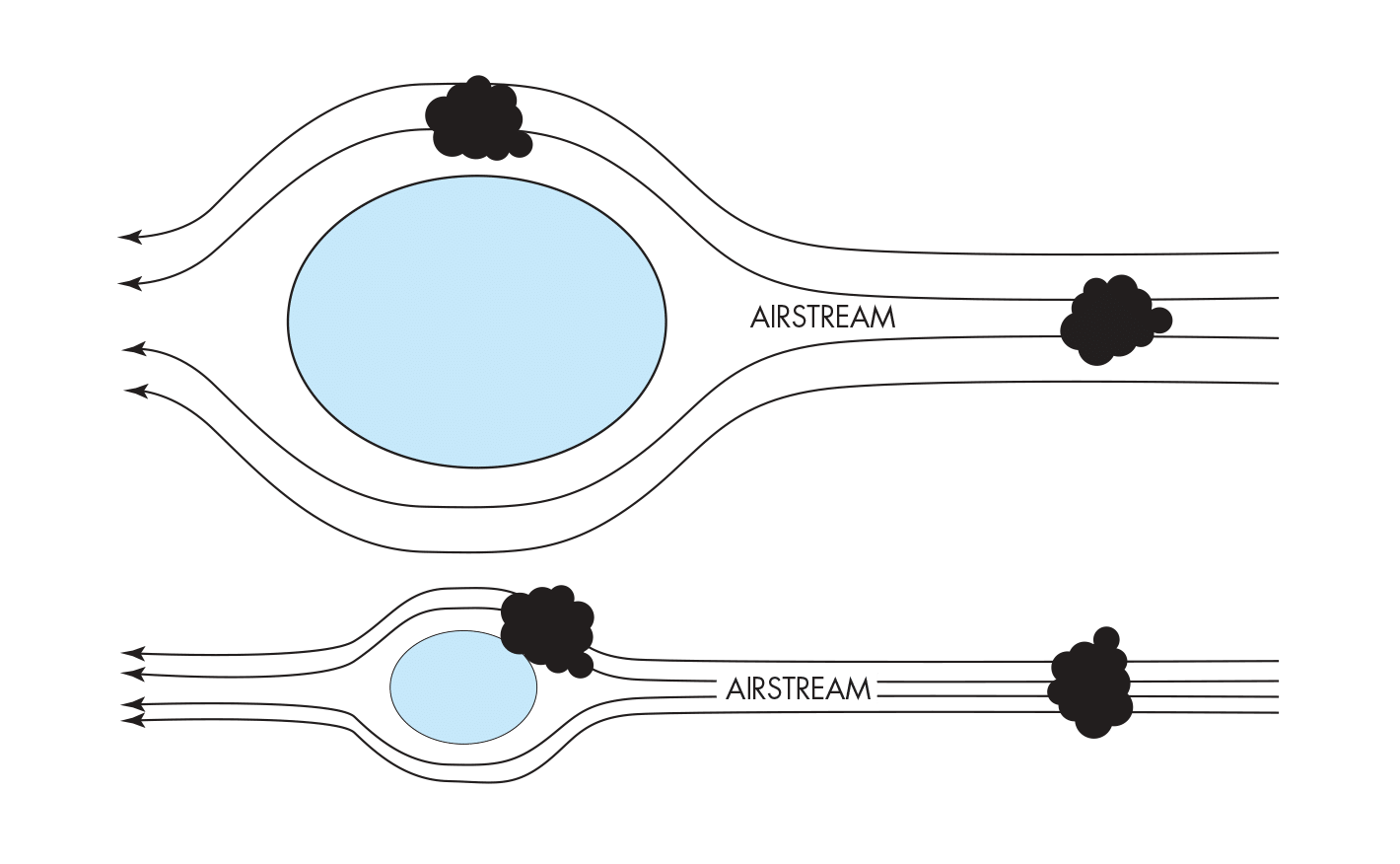 The right sized droplets will effectively bind to the dust and suppress it. When the droplets are of equivalent size, there’s no getting around it; they collide, combine and fall to the ground assisted by gravity.

A concentrated additive (such as Hydrowet) may be used to improve the wetting ability of the water. However, in cases where fog cannons are required for dealing with visible dust, an additive is not normally needed. Additives are mainly used when suppressing respirable sized dust.

How can a Fog Cannon be used for Dust Suppression? 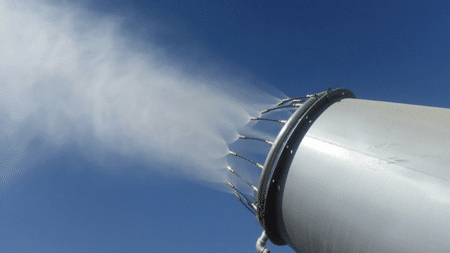 Fog cannons are ideal for a variety of situations where traditional dust suppression measures can not be applied or aren’t efficient to use.

Let’s take a look at a specific scenario where a fog cannon was effectively used by Dust-A-Side to achieve a high level of dust suppression.

A mine site located in close proximity to a community was experiencing issues with governing bodies due to visible dust being generated by one of its haul roads.

The haul road ran parallel to a public road and was used frequently by 300-400 tonne mine trucks. The trucks were stirring up dust which floated over the public road causing visibility issues for motorists.

Visible dust was also being generated by excavators and other equipment used across the site which was of concern to the local community.

In this scenario, the primary use of water trucks to wet the road would not have been a sufficient solution.

Drenching a haul road significantly shortens the lifespan of truck tyres by making them more vulnerable to cuts.

Wetting the road would also have created safety issues by turning the dusty surface into a muddy surface.

The mine site was also prevented from allowing any water run-off from the lease.

To prevent the dust impacting on the local community, oscillating fog cannons were positioned along the boundary of the mine site.

Through a combination of strategic placement, direction and pitch of the fog cannons, a mist curtain was created which dissipated any dust generated from the haul road as well as the other mining equipment being used.

As fog cannons allow for easy configuration and mobilisation in varying conditions with minimal infrastructure, traditional dust suppression measures were less suitable in this scenario.

The fog cannons allowed for a wide area across the whole site to be targeted and the type of dust which needed to be suppressed was visible and not respirable.

Want to learn more about using Fog Cannons to suppress dust at your site?

To learn more about fog cannons and whether they are a suitable solution for your dust suppression needs, contact the experts at Dust-A-Side today.

We’ll happily supply you with an obligation-free report to design a dust suppression system tailored specifically to your needs. 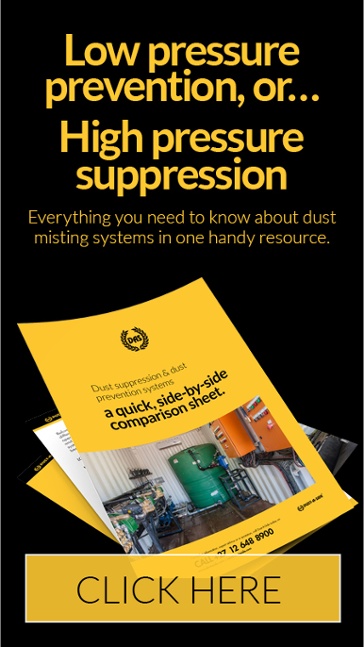